Making the most of my "Dash"

Dear 16 year-old self, you are not welcome here… 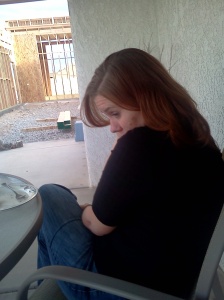 I have set a timer for 15 minutes.  I have to do that because I know that I  get so focused with what I’m doing.  Whether it’s blogging, responding to email, facebooking, reading a book, reading someone else’s blog, cooking, baking; the list goes on and on.  I need to be able to come up for air every now and then, and the timer helps me remember to do that.

This became a problem for me recently when Mister let me know that I was so deeply immersed in other things, that I seemed to be going down a different path.  Alone.  Without him. Without the kids.  In my own world, which was consisting of “other people’s” virtual worlds.  I became incredibly defensive.   That always results in my not hearing things that are said, in the context in which they are said.  Simply put, my emotions take over and I put a completely different spin on what I’m hearing.  Thus a rather difficult “conversation” ensued.  One in which I regressed to an old, and highly inappropriate, response.

“I’m in trouble.”  That has always been my main reaction whenever a situation arises where someone is upset.  Whether I was responsible for making them upset or not.  Frankly, that was the expected response for most of my life.  I have realized that I have often resorted to becoming a 16 year old girl in the presence of my parents.  That young girl would do anything to keep her parents from becoming unhappy with her, and even lived her adult life with that attitude.  If I did something that upset my parents, I was reprimanded for it.  Even as an adult. That never went away after I moved out and started my own family.  If I did something they didn’t like, then I [felt like I] was “in trouble”.  My “fix” to that would be to stop doing whatever it was that “got me in trouble”.

I understood what Mister was saying about my time and attention not being exactly where it should be. So, some of you may have noticed, I disappeared from the interwebz.  Sorta.  For a time, at least.  I didn’t want to make the blog disappear, as I think there may be a post or two that’s important enough to need to be out there.  During the course of my conversation with mister, I realized I felt pulled in too many different directions with the blog, my facebook page, other people’s facebook pages, and a particular facebook group I had joined.    So, I shut it all down.  To get out of being in trouble.  And then I started thinking.

I can take days to work through things.  Mister has had a difficult time with that.  We have agreed that there should be no unspoken resentment between us.  We both always want to be open and up front about whatever is going on in our minds and hearts.  So when I need time to digest things and figure out how I really feel about something, he has to make himself let me do that alone.  He would rather us work together to quickly resolve whatever the issue is, but I have spent so much of my life giving the expected response that now I really need to spend time figuring out what I really think.  We also always and ever try to do things to make the other person happy.  We both want what is best for each other.  And I came to realize that I was giving up things I wanted to do, because I thought it would make him happy and keep me from being in trouble.

I felt stirrings of anger.

This was badness.  I knew that either one of us sacrificing something that is important is not what our relationship is about, nor what either of us wants.

I woke up in the middle of the night and realized that my emotions, defensiveness, and inappropriate “I’m in trouble” response, had made me unable to hear what Mister had said during our conversation days earlier.  I heard him when he said, “I feel lonely when I’m sitting next to you” and “I feel like I can’t interrupt what you’re doing without upsetting you”.  All I knew was that to make him not feel lonely I needed to give him my undivided attention, and be able to do so at any moment he desired it.  But, that is NOT what he asked for.  I knew that he would never ask, nor want, me to give up things I enjoyed to make him happy.  That is exactly the opposite of what he wants.  All he was saying is, “I want you to be available. Not to other people you don’t really know.  Be available to me. To the kids.”

I also became acutely aware that the reason I had become so engrossed in doing other things online was to avoid having to think about an issue that, while I was only an outside observer, caused a great stir of emotion within me.   I had so many thoughts swirling around my head that needed to come out.  I was getting really pissed off, but I wasn’t ready to deal with that yet.  So I read other people’s blogs and threw myself into putting great thought and effort into commenting on their posts.  I felt a pressing need to distract myself by responding to any little comment directed at me on the internet.  I have since realized that there was nothing wrong with doing any of those things, and Mister was not “mad at me” for doing them either.  What was wrong was doing them to avoid an issue, and at the exclusion of other people.  My real priorities.

I discovered that I was in the midst of creating a situation of resentfulness between Mister and I. After a week, I had been able to understand the real issue, and was ready to discuss it with Mister.  He was shocked to find out that I felt I had been in trouble.   This particular response of mine is so foreign to him, that he does not recognize it.  He would never treat his own adult children that way, so he has no concept of any adult feeling like they are in “trouble”.

I love the relationship that I have with Mister. It is taking me some time to grow into my adult self.  Despite my occasional misperception of being treated like a child, he has NEVER treated me that way.  In my time with Mister, many of my reactions and responses have taken him completely off guard.   When I start to revert  to the 16 year-old, people-pleasing, “I’m sorry… I’ll never do it again… Whatever you want…” persona, he gets fairly upset.  He doesn’t want that.  No one who loves another person should want that.  Not even parents should want, demand, ask, or even tolerate that behavior from their grown children.  Logically, I know this.  Sometimes that darned 16 year-old in me takes over and tries to “fix” things the only way she knows how.

I write this not because I want to put our “stuff” out there… but simply to show that, as in all relationships, we are human and we have to communicate to work through our stuff.   Every one will lose focus of their priorities at one time or another.  I think it happens more now than ever, simply with the advent of the internet (particularly FB!).  I was headed down a path of anger and resentment that could have done some serious damage.  I was strong enough in myself to say that what I thought was the right fix was not working for me (this is not a familiar action to me).  I mustered up courage to tell my husband that very thing, and to tell him that I had completely misunderstood him in my defensiveness.  I experienced growth, in that I realized I don’t need to be defensive with my life-partner.  I simply need to communicate what I need, and hear what he needs.  I need to really LISTEN.

My timer has gone off at least 6 times since I started writing this.  Mister has rolled his eyes at me every time I stopped and came over to him and gave him a kiss.  I’ve reassured him that I am not setting the timer for him, but for me.  I don’t want to get so lost I can’t hear the kids when they call my name.  What I’m doing is not so important that Mister has to wait for an hour and a half before asking me a question.  I do this so I don’t forget that while writing makes me happy, I have people that make me happier.  I want to be available to them.  And… much like Mister, I love those little kisses!

There'll be two dates on your tombstone and all your friends will read 'em but all that's gonna matter is that little dash between 'em. ~ Kevin Welch