Making the most of my "Dash"

Josh is SO busted!

Oh Josh... We found your MESS

As I was typing up the “Company’s Coming” blog, Mister went to check Josh’s room for me to make sure it was “Company Ready”.  I had JUST told Mister how good the kids have been lately about keeping their rooms straightened up.  See, every night before bedtime we do room inspections.  Every morning before school, we do room inspections.  They usually have scraps of paper on the floor (I have no idea WHY, since they have a trash can in their room, for crying out loud!).  There are the usual stray socks, pencils, erasers, shoes, etc.

However, I haven’t had to get on them so much about that stuff anymore, and I was feeling PROUD of them for being more responsible.  Apparently, I wasn’t “inspecting” the right part of Josh’s room.  That kid had a nasty pile of trash, toys, pencils, pens, erasers, you-name-it-and-it-was-there on the other side of his bed.  Oh, and STUFFED ANIMALS. Did I mention Josh was 11?!  (Yes, Josh, I put that out there to annoy/humiliate you as is my Motherly Right when you try to be sneaky!!) He also blamed his 15 year old sister, Megan, when he ran out of socks saying she didn’t do the laundry. Nope. Not true.  He had stashed them along with the trash beside his bed. 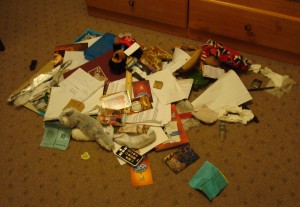 Momma was NOT pleased!

Now, I made a nice pile of it on his floor specifically to take a picture for this blog.  Normally, I would have left it there for him to clean up when he gets back home.  However, company saved his little butt from cleaning it, because I just did it.  AND ALMOST BURNED THE COOKIES BECAUSE OF IT.  So. not. okay.

Being the oh-so-nice mom that I am, Josh may now find that he is missing some tiny Lego pieces (thank the Lord because I hate stepping on those stupid things).  He also may find other stuff missing too.  Like, oh…say…. 39 clues cards, Pokemon cards, Bakugan cards as well as a few Bakugans, and Bey BLade peices, just to name a few.  You really should keep your stuff put up where they belong kiddos, because when Momma has a chance to get rid of those annoying toys… She. Is. Gonna. Take. It.

There'll be two dates on your tombstone and all your friends will read 'em but all that's gonna matter is that little dash between 'em. ~ Kevin Welch